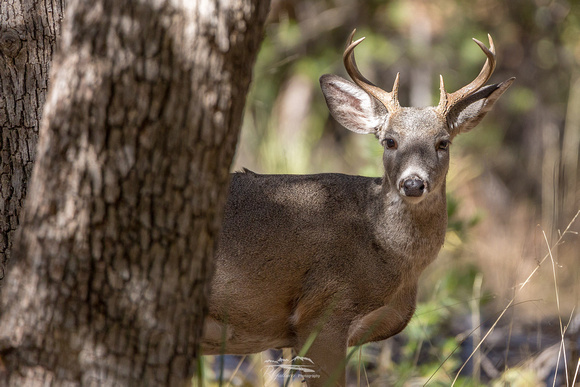 The Coues (pronounced cows) Deer is a White-tail variant found above 4,000 feet in scattered populations of the Arizona deserts. Smaller than typical white-tail, they are named after famed naturalist Elliott Coues. We saw many on yesterdays hike at Ramsey Canyon, and all we encountered seemed relatively tame. That may be due to their life in a protected sanctuary.

This buck had just won a rut battle with a young upstart. Unfortunately, I could not get my camera on the fight fast enough. Shortly after the youngster left for greener pastures and the victor emerged from the trees to pose for this shot. I am sure he was feeling pumped and victorious as he let me take his picture. I would have been!
Shoot Date: December 28, 2017
Canon EOS 5D Mark III
Aperture priority ¹⁄₈₀₀ sec at f/6.3 0 EV
Lens: TAMRON SP 150-600mm F/5-6.3 Di VC USD A011 @ 600 mm
ISO: 1250
©RGallucci Photography
User Agreement
Cancel
Continue