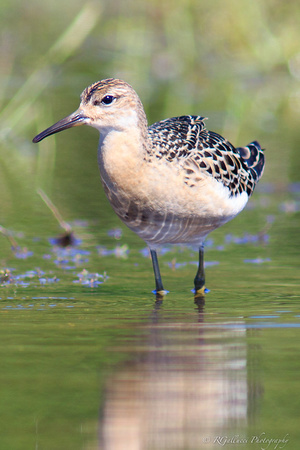 We had been out early in the morning to capture the sunrise. When we had finished, we decided to go to Huntington Beach SP in search of any migrants that might have blown in from the storms. As we combed through the trees, my phone went off. It was a local birder, and new friend, with news that he had just seen a Ruff at a park about 20 minutes away. We were off immediately.

Arriving at Myrtle Beach SP we could not find the bird. Expanding our search we found it in the middle of a dry parking lot, impervious to the cars that were darting past. Terrified that it would come to harm, I slowly approached. As expected, the bird began to move away, eventually ending up back in the relatively safe, still water pool that had collected from the floods.

I got out my camera and shot away. At one point, the bird came within 1 foot of me - absolutely fearless.

I could not ask for a better day than one starting with a majestic sunrise and including a Ruff. Nor could I hope for a better bird for my 300th than this one.