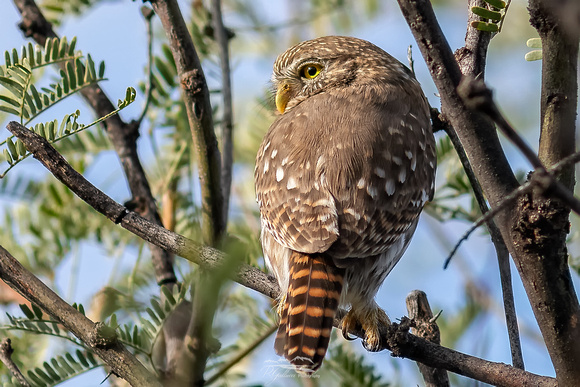 Southern Texas and Arizona represent the northernmost border of the Ferruginous Pygmy-Owls (FEPO) range. Abundant below 4,000 feet throughout both the eastern and western coastal areas of Mexico they are a ferocious predator of lizards, small songbirds and earthworms. Once across the border they are more frequently found in Texas than in Arizona. In 1997 they were listed as endangered in southern Arizona. This designation was erroneously removed in subsequent years.

As Tony, Bryan and I were enjoying our time photographing the owl in the barren ranchland of western Tuscon we discussed why more FEPO's were not seen here. Estimates project that there are between twenty to fifty breeding pair from Tucson south but those numbers could be low. The habitat is every bit as welcoming as that in Texas and Mexico, and there is ample food to sustain them. We hoped that they are probably here but in terrain too tricky for most birders to navigate.

I have read that the sky island region of southern Arizona has the most significant diversity of animals in the united states. One year into our move here I am discovering this to be true. Anyone willing to do a bit of exploring can be rewarded with new species daily. I see this to be an immense testimony to the greatness and artistry of God. I am blessed to be its witness and humbled to be its scribe.
Shoot Date: December 8, 2018
Canon EOS 5D Mark IV
Shutter priority ¹⁄₅₀₀ sec at f/5.0 0 EV
Lens: EF400mm f/2.8L USM @ 400 mm
ISO: 100
©RGallucci Photography
Powered by ZENFOLIO User Agreement
Cancel
Continue