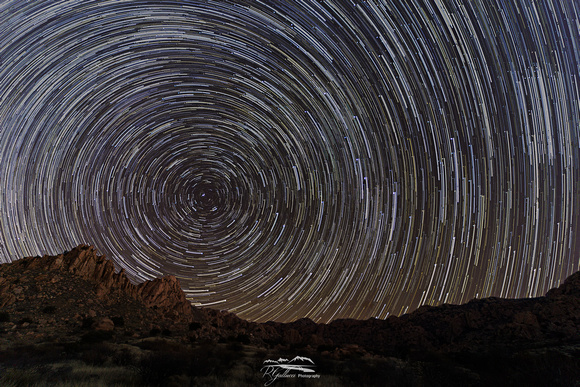 Most people see the sky move throughout the night but do not realize that the sky is stationary to our view, it is the earth that is moving. The six hours we spent the other night photographing the Quadrantids Meteor shower resulted in over 1000 images. It seemed like a waste to delete all those shots, so I took the first two hundred and stitched them together into star trails. Each line in the sky is a star whose position moved relative to my camera. The area with the smallest movement in right next to Polaris, the North Star. It remains relatively stable through the night because it is at the center of the earth rotational axis. While geeky to some I think it is star trail images and the way they illustrate the earth's movement are extraordinarily cool.

The Dragoons are one of my all-time favorite mountain ranges. With their bronze fractured rock formations, they look like some alien landscape. I have also been told that they look like dinosaur dung - but that would be a gigantic dinosaur!

This is a fantastic world. It is a circular tapestry of infinite beauty that reveals itself in so many ways. It is my belief and faith that it was created by a benevolent God, the master artist. The words to express my humble gratitude at being able to witness this artistry and share it often seem trite and feeble. But as I continue as His scribe, I will continue to try to do Him honor.
Shoot Date: January 4, 2019
Canon EOS 5D Mark IV
Manual 15.0 sec at f/2.5 0 EV
Lens: 15mm @ 15 mm
ISO: 3200
©RGallucci Photography
Powered by ZENFOLIO User Agreement
Cancel
Continue