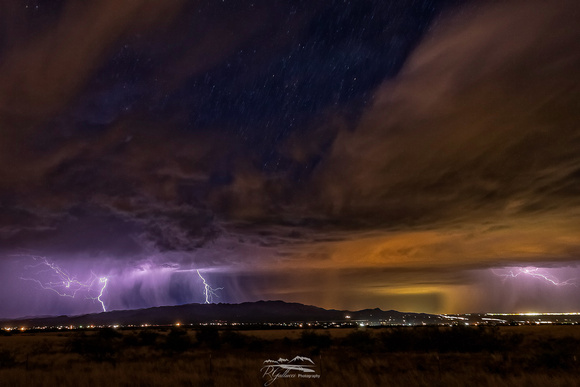 Often when I look at nature unfold before me, I am reminded that the world can be a macro example of the microcosm of life. This was the case as I watched the recent storm over the Mule Mountains. It was a revelation that invited me to reflect on the duality of emotions I feel during times of uncertainty and chaos.

Here, playing out before my eyes, was nature at its most extreme. As the sky roiled above, explosions of tentacled lightning erupted from the bloated bellies of ion-charged clouds, hell-bent on reducing anything below to ash and ruin. As grand as it was to watch, it was humbling to concede the powerlessness I had to do anything about it. Sometimes life is like that as well. A storm of destruction passes through our existence with little to nothing we can do to mitigate it. We are as spectators in a circus of ruin, rubes in the carnival of helplessness.

There are times, especially in the midst of the storm, that that is all we see. And, If that were all there was it would be a bleak life indeed. But, in the same scene, above the fury that raged below, through a hole in the clouds, the eternal heavens with their beaconing lights of hope, shone brightly. A view of forever illuminated by endless guiding lights that calmly stood in a constant vigil of strength and faith. It could be easy to miss if I had focused only on the storm. I am blessed that I was given an opening to see it.

And, as it is in nature, it is in life, there are times when we are in the middle of a storm that we forget that it will pass. Eventually, all storms give way to the calm that surrounds them. When we are lucky, we can glimpse that calm amidst the confusion to anchor us to the hope of the future. It is in that belief that we continue in our great exploration of a life well lived.

Had we not moved to Arizona I might never have had the fortune to witness this scene. Had we not moved here I could not scribe the lesson God provided through this world, His grandest palette. For that, I am truly thankful and blessed.
Shoot Date: July 7, 2018
Canon EOS 5D Mark IV
239.0 sec at f/4.0 0 EV
Lens: EF16-35mm f/4L IS USM @ 16 mm
ISO: 200
©RGallucci Photography
Powered by ZENFOLIO User Agreement
Cancel
Continue