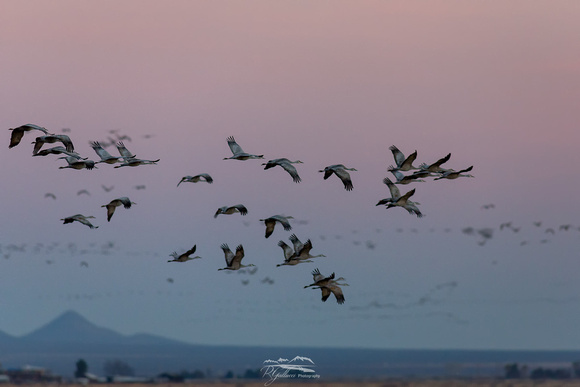 Flight of the Sandhill Cranes

Cindy gave me my first birthday present last night. She told me to get out of the house early to photograph the Sandhill Cranes at Whitewater Draw at first light. I had heard about the surreal magnifisence of 30,000 Cranes taking off within a half an hour of each other as they began their quest for corn from the surrounding farms. I was not prepared for the extraordinary wonder of what it would look like.

I arrived before first light. It was in the low 30's outside, and the only other people in the parking lot was a young couple bundled for blizzard. Being a typical North Easterner, I popped out of my car and banged on their window to ask questions. After their momentary shock at the assault, they could not have been nicer. It turns out that the gentleman is a photog on assignment for a local Tuscon paper. He had been there before and filled me in on some crucial details on where to stand and what would be the best lens to use. By the time we were done speaking, I had realized that my Arizona wear was not going to cut it. I was freezing! I donned my heavy boots, down jacket and gloves and put my kit together for the hike to the suggested location for the shoot. Note: I had laughed at Cindy when she told me to bring the down jacket. Another example of her superior intelligence.

Once at the site I waited for the light to lift nights curtain and the show to begin. Have I mentioned I was unprepared for its splendor?

This is not the best shot from today. I don't yet know what the best shot will be as I filled four memory cards with images. This was the first image I stopped at when reviewing the collection at home and felt it shared the mood well. The black dots behind the group of cranes are thousands of more cranes in flight.