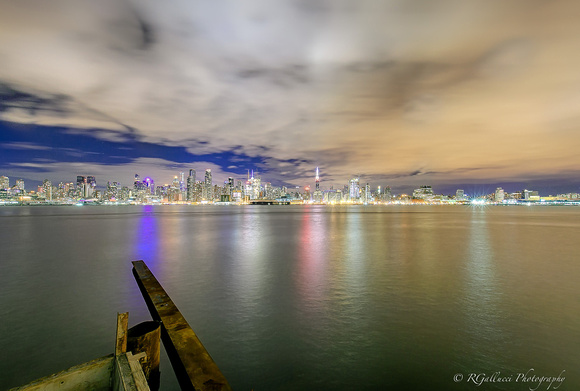 A View from the End of a Weehawken Pier

Leaving a construction site open where I can find it is never a good idea.

The city looked so beautiful last night that Cindy and I decided to stop by Weehawken to take a few shots. Years ago the view from the bulkhead provided an unfettered panorama of the city. Spanning from the Village to the GW bridge, it was a favorite spot on the Jersey side to shoot the city.

Imagine my disappointment when we arrived and found a massive construction project jutting out into the river. I figured there would be no shoot, and I would need to scout a new spot. As we were already there, I decided to take a walk and see what I would see. The construction site had a massive crane atop some concrete pilings, and the framing of what appeared to be a new pier to its right. There was a great deal of gaps between the crane and the pier, too much to jump with my gear in hand. Walking further I discovered, to my joy, that the construction people had left the gate to the crane platform open. Time to explore.

I wouldn't recommend that others take the walk across precariously attached planks and beams that afforded me access to the end of the pier. Even I, who enjoys risk, was concerned when one of the makeshift bridges began to shift perilously under my feet. The river, with its icy cold current, lurked a good twenty feet beneath my swaying body. While not concerned with my well being, I couldn't stop worrying about how I would replace my kit if we tumbled into the river. Making it to the end of the pier, my fears were replaced with joy at the splendor of the city before me.

Of course, while I was out there, a few police stopped to shine their super mag spotlights on me. I just kept shooting, figuring if I was to be arrested I might as well get a few shots. Soon they were gone, more pressing dangers calling their attention. I finished the shoot and made my way back across the obstacle course to the safety of terra firma.

Of course, I had to deal with a slightly overtired and terrified girlfriend when I got back. Cynthia eventually calmed down. I think it was about the time we got to our driveway.

This is the first shot from the series. The rest are meant for a panoramic HDR, which I do not have time to edit now. I hope you enjoy.
Powered by ZENFOLIO User Agreement
Cancel
Continue